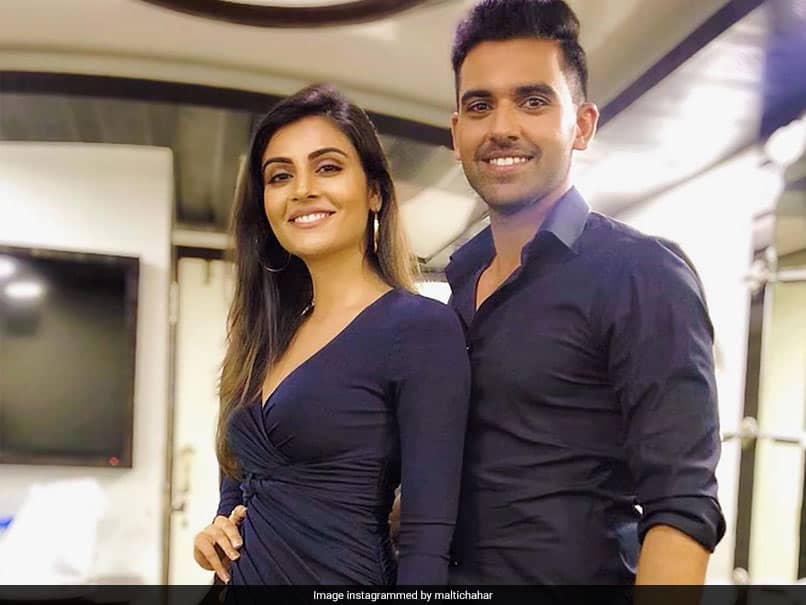 
Three-time champions Chennai Super Kings (CSK) are in a tremendous form in the Indian Premier League (IPL) 2021 and are sitting comfortably on the second spot in the points table, after winning three matches on the trot. CSK’s new ball bowler Deepak Chahar, after a disappointing opening match, has found his rhythm and picked up eight wickets in the previous three outings. In CSK’s previous match against Kolkata Knight Riders (KKR), Deepak Chahar bowled an exceptional opening spell, taking four wickets inside the Powerplay. During that spell, he also completed 50 wickets in the IPL when he dismissed KKR opener Shubman Gill in the very first over of the innings. Deepak Chahar’s sister Malti, who follows his matches regularly, has now reacted to his brother’s fantastic achievement. “And many more to come @deepak_chahar9,” Malti wrote, quote tweeting a CSK post informing about Deepak’s entry into 50-wicket club in IPL.

Deepak Chahar made his IPL debut in 2016 but couldn’t get any wicket in the two matches he played that season. Next year, he played three matches and got only one wicket. When CSK returned to the IPL in 2018, after serving a two-year ban, they bought Deepak Chahar and he made an immediate impact, picking up 10 wickets as CSK won their third IPL title.

Leading CSK’s bowling attack in 2019, Deepak produced his enjoyed his best IPL season, returning with 22 wickets from 17 matches. The Chennai-based outfit made it to the final once again but suffered a massive heartbreak, losing to Mumbai Indians by just one run.

Last year, the tournament was held in the UAE and like the majority of the CSK squad Deepak Chahar (12 wickets) wasn’t as effective and they failed to qualify for the playoffs for the first time in their history, finishing second from bottom. However, Deepak Chahar has been in top form in the ongoing edition so far and is very much in contention for the Purple Cap, currently occupying the second spot with eight wickets.

Why Is There A Bubble Tea Shortage In The US? 5 Tea Options For You

“Steffi (Graf), Will You Marry Me?” Her Epic Response

Steffi Graf once famously received a marriage proposal on court during Wimbledon. Tennis legend Steffi ...
By Publisher
3 mins ago

The government has clashed with Twitter recently over a range of issues. New Delhi: Twitter ...
By Publisher
18 mins ago

Alanna Panday and Ivor in stills from her video (courtesy alannapanday ) Highlights Alanna shared ...
By Publisher
51 mins ago

“Steffi (Graf), Will You Marry Me?” Her Epic Response