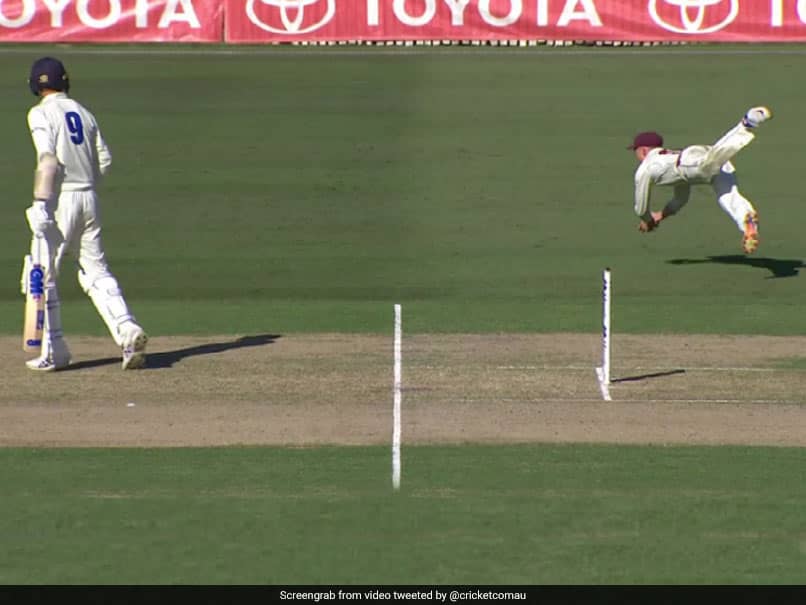 Sheffield Shield: Marnus Labuschagne produced a moment of magic on the field on Day 1.© Cricket Australia/Twitter


The Sheffield Shield final is being contested between Queensland and New South Wales and on the very first day of the match, a moment of magic was witnessed on the field. Marnus Labuschagne has been in terrific form in the 2020-21 Sheffield Shield season. He has scored 629 runs in seven matches (9 innings) and averages 69.89. However, on Wednesday, his biggest contribution came while fielding. Stationed at short-cover, Labuschagne dived full-length to his right to complete a sensational catch that wrapped up the New South Wales innings.

A full delivery from Michael Neser was driven firmly by Josh Hazlewood but Labuschagne plucked the ball out of thin air, leaving the on-air commentators in disbelief.

“That’s an unbelievable catch. That’s what you want from your fielders. What a catch!” said one of the on-air commentators.

Labuschagne with the screamer! And it caps off a brilliant five wickets for Neser too #SheffieldShield pic.twitter.com/u5UlPJDvGY

Labuschagne’s brilliant catch capped off a five-wicket haul for Michael Neser as New South Wales were bundled out for 143 in their first innings.

Captain Kurtis Patterson top-scored for NSW with 43 runs while Sean Abbott chipped in with 23. Six NSW players registered single digit scores in a poor batting display at the Allan Border Field in Brisbane.

Apart from Neser, Jack Wildermuth was on song for Queensland as well, taking four wickets for just 21 runs off his 16 overs. While Xavier Bartlett and Mitchell Swepson went wicketless, Brendan Doggett chipped in with a wicket in a fine showing from Queensland’s fast bowlers.

At the time of writing this, Queensland had lost Joe Burns for 20 after a solid start.

The baby has been rescued and kept at an adoption centre. (Representational) Bhubaneswar: A ten-day-old ...
By Publisher
2 mins ago

Ebrahim Raisi is set to take over at a time when Iran seeks to salvage ...
By Publisher
19 mins ago

Amarinder Singh said those who make a sacrifice for the nation should never be forgotten(FILE) ...
By Publisher
36 mins ago