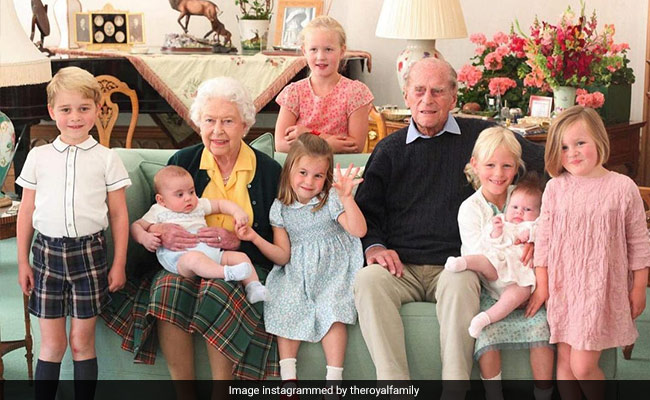 Prince Philip photographed with seven of his great-grandchildren in 2018.

Members of the British royal family have shared never-seen-before photos of Prince Philip, who died on Friday aged 99, as a way to honour and remember him. On Wednesday, the royal family’s official Instagram account shared a series of photographs of Prince Philip, Duke of Edinburgh, remembering him as “a father, grandfather and great-grandfather.”

In one throwback photograph, the Duke of Edinburgh was seen posing on horseback with his son, Prince Charles. In another, he and the Queen stand with Prince William and Kate, and a third pic shows him laughing with granddaughters Princess Eugenie and Princess Beatrice.

“Today, members of the Royal Family have shared photographs of The Duke of Edinburgh, remembering him as a father, grandfather and great-grandfather,” reads the caption.

Also in this photograph are cousins of the Cambridge children. Isla Phillips, Mia Tindall, Lena Tindall and Savannah Phillips were all photographed with Prince Philip and the Queen, their great-grandparents.

He shared a photo of Prince Philip with Prince George and wrote, “I will never take for granted the special memories my children will always have of their great-grandpa coming to collect them in his carriage and seeing for themselves his infectious sense of adventure as well as his mischievous sense of humour!”

There is currently no evidence of Delta Plus having anything to do with a third ...
By Publisher
4 mins ago

John McAfee has been in jail in Spain since he was arrested at Barcelona in ...
By Publisher
37 mins ago

Mamata Banerjee said that those who have taken Covishield doses are not facing any problem ...
By Publisher
54 mins ago

India vs New Zealand: New Zealand Defy Size With Sheer Class And Power, As They Beat India To WTC Mace