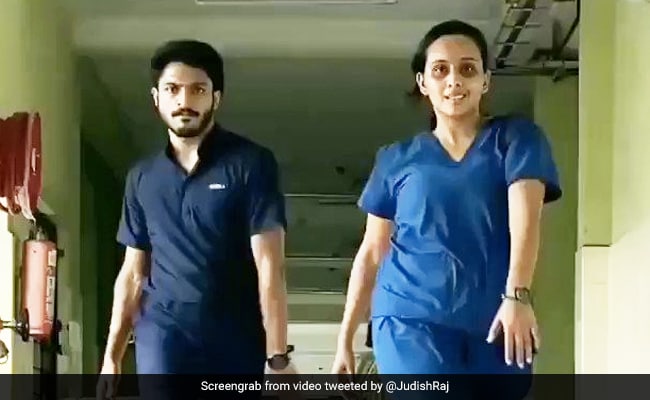 The two students received a lot of love and encouragement after they posted a 30-second clip of them dancing to Boney M’s cult song Rasputin. But amid all the appreciations, the video also received some hate comments from users drawing attention to their religion.

Naveen K Razak, refusing to verbally reply to the hate comments, responded by releasing another video along with other students of “Vikings” – the dance group of Thrissur Medical College. The new video has more dancers dancing to the same song and the same moves as the original Reels video along with a message of ‘unity in diversity’. It was posted on social media post with the caption: “If you’ve decided to hate, we’ve decided to resist”.

The video responses have been fun and youthful with a strong message against hate.

“We were concerned about two statements on social media. One, that doctors shouldn’t dance. And second is about communal hatred, a deeper concern. We strongly condemn both these statements and have started a #RasputinChallenge. We are getting a lot of inquiries from people not even associated with medical colleges”, Vishnu Gopan, the state convenor of IMA’s Medical Students Network (MSN) told NDTV.

Among the videos received by the SFI wing of CUSAT which have been widely shared on social media, the one of a girl dressed in traditional Kerala attire dancing to Boney M’s number stands out.

“SFI CUSAT Is organising this dance competition in solidarity with Janaki and Naveen who were subjected to hatred and gross effects of communalism. This is a protest through art and we are excited with the responses.”

The latest to step up the solidarity with a cause is Kerala government’s video encouraging people to get vaccinated against Covid.

The video shows an animated Covisheld and Covaccine dancing to Rasputin, inspired by the two students. Leaders like Thiruvananthapuram MP Shashi Tharoor, CPM General Secretary Sitaram Yechury have been tweeting against hate, in support of the dancing students and all the others who have joined the movement.

Lisa Haydon, “Nervous” About Having Another Baby, Pours Her Heart Out On Instagram

Congress urged PM Modi and Supreme Court to order a probe into the alleged land ...
By Publisher
53 mins ago

Virat Kohli appeared to be in a jolly mood in early on in New Zealand’s ...
By Publisher
2 hours ago