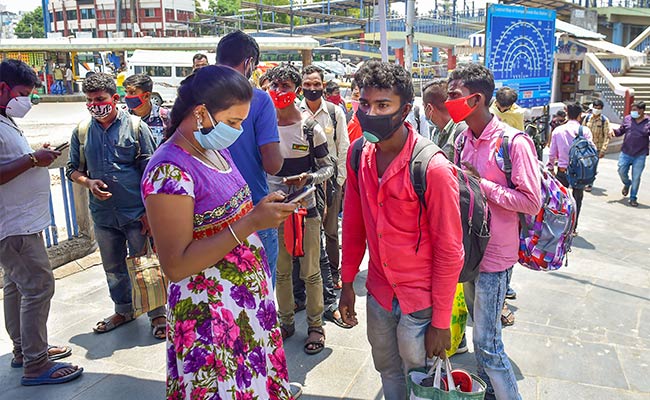 8,500 election booth-level committees to tackle the surge in coronavirus cases.

While the city of Bengaluru reported almost 5,000 new cases of COVID-19 in the most recent 24-hour data, rivalling Delhi and amounting to around half as many as Mumbai, the Karnataka government on Thursday insisted that it is ready to tackle the rising numbers.

Health and Medical Education Minister Dr K Sudhakar, who held a meeting with the city’s municipal body Bruhat Bengaluru Mahanagara Palike (BBMP) and district chiefs of Bengaluru Urban and Rural and other officials, announced a strategy to handle the surge at the election booth level.

“We have more than 1.20 crore people (in Bengaluru). The density is too huge. That is why we have a different strategy to contain the pandemic in Bengaluru. So, we are establishing over 8,500 booth-level task force committees,” he said.

He said the booth-level task force committees would be formed with healthcare workers, education and revenue officers, police and BBMP – and also NGOs and welfare committees to ensure people’s participation.

He also said that the BBMP had been instructed to carry out 20 RT-PCR tests for each positive case reported. “More than 95 per cent of all our tests have been RT PCR,” the minister said.

Dr Sudhakar said there were enough beds in the city to cope with the surge of cases in the second wave.

“We have enough beds. Last year, thanks to the Covid situation, we have ramped up our facilities by six times. We had only 5,000 oxygenated beds last year. Today, we have 35,000 beds. In Bengaluru alone, in the next few days, we will earmark 3,000 to 4,000 beds across all spectrums,” he said.

The minister also dismissed concerns over a possible shortage of vaccines, saying, “Why are you worried about the vaccines? We are not at all short of vaccines. I have been reiterating every day that we are receiving vaccines almost twice a week. Even now we have storage of 25 to 30 lakh doses. The union government has assured me that in a couple of days they will be sending another 25 lakh doses. The union health minister has categorically clarified that no state will run short of vaccine.”

Bengaluru continues to account for the bulk of cases in Karnataka, recording 4,991 cases out of the state’s 6,976 cases reported on Wednesday.

India reported a record 1,26,789 new COVID-19 cases on Thursday as several states struggled to contain a second surge in infections, complaining of vaccine shortages and demanding inoculations be expanded to younger people.

Daily infections surpassed 100,000 for the first time on Monday and have now exceeded that mark three times, the biggest daily rises in the world.

The spike, much faster than last year’s first wave, has caught authorities by surprise. The government blames the resurgence mainly on crowding and a reluctance to wear masks as shops and offices have reopened.

Vaccine centres in several states, including hardest-hit Maharashtra, have been shutting early and turning people away as supplies run out. Odisha state said it had closed half its vaccination sites.

Neena Gupta in a still from the video. (courtesy masabagupta) Highlights The actress was last ...
By Publisher
25 mins ago

A coalition spokesperson said the US drawdown will not affect Saudi air defences (Representational). Abha ...
By Publisher
41 mins ago

WTC Final: Rohit Sharma poses for a photo with Ritika Sajdeh.© Instagram With ...
By Publisher
57 mins ago