Vijay Sethupathi thanked director Thiagarajan Kumararaja for giving him the character of Shilpa in Super Deluxe. He won the National Award for Best Supporting Actor. Vijay Sethupathi thanked director Thiagarajan Kumararaja (R) for trusting him to play the role of Shilpa in Super Deluxe.

Vijay Sethupathi won the National Award for Best Supporting Actor in director Thiagarajan Kumararaja’s Super Deluxe. He played the role of Shilpa, a trans person, who comes to meet his wife and son after living in Mumbai for several years. Vijay Sethupathi thanked director Thiagarajan Kumararaja for giving him the role of Shilpa. Samantha and Malavika Mohanan congratulated Sethupathi on the award.

Vijay Sethupathi’s climb to fame is something inspirational for every aspiring actor in the film industry. Having started his career as a background actor, Vijay Sethupathi has grown to be one of the leading stars in Kollywood. He won his first National Award for his performance in Super Deluxe.

The Master actor took to Instagram to share the Super Deluxe poster and a photo of director Thiagarajan Kumararaja to thank him. He wrote, “Thank you Director #ThiagarajanKumararaja & each and everyone. #SuperDeluxe #Shilpa (sic).”

Samantha acted with Vijay Sethupathi in Super Deluxe. She took to the comments section to wish him. She posted, “woo hoo .. congratulations (sic),” with a fire and party emojis. Malavika Mohanan, who worked with him in Master, wrote, “Making tamil cinema proud everywhere! Congratulations sir! (sic).”

Here are the replies: 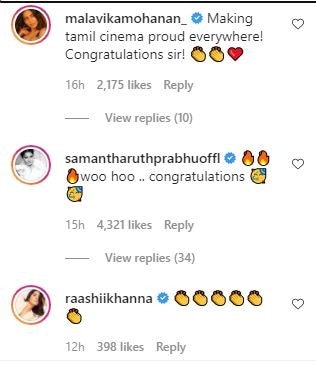 Super Deluxe, which released on March 29, 2019, met with an overwhelming response from the audience. There are four interwoven stories, which are shown in parallel, converge during the climax. The ensemble cast includes Vijay Sethupathi, Fahadh Faasil, Samantha Akkineni, Ramya Krishnan, Mysskin, Gayathrie and child actor Ashwanth.

A fresh spin: the clothes made out of recycled wood pulp – Positive News