Shahid Kapoor took to Instagram to congratulate the team of Telugu film Jersey after their National Award win. Jersey received awards in the Best Telugu Film and Best Editor categories at the 67th National Film Awards. 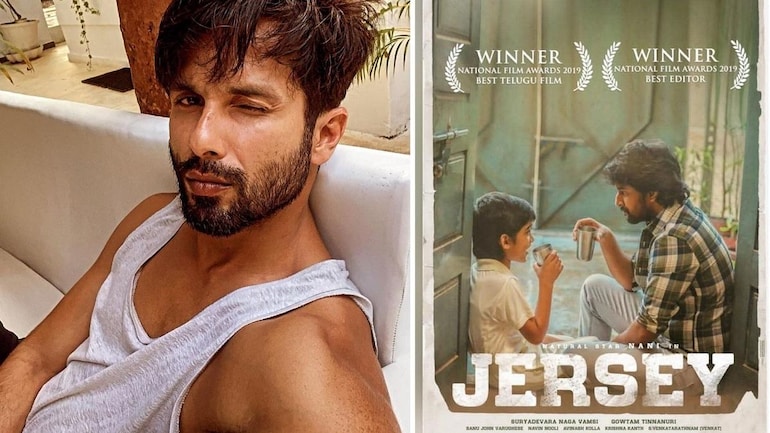 Shahid Kapoor congratulated the team of Telugu film Jersey after it won two National Film Awards. The winners of the 67th National Film Awards were announced on Monday, March 22, and Jersey received awards in the Best Telugu Film and Best Editor categories. Jersey’s National Award win has put Shahid Kapoor in a lot of pressure. Why, you may ask? Well, the actor is playing the lead role in the Hindi remake of Jersey which will release on Diwali this year. Shahid’s film is also titled Jersey.

Shahid Kapoor took to Instagram to share a poster of the film featuring Nani and Ronit Kamra (who plays Nani’s on-screen son in the film), and congratulated the team for their big win. “Huge congratulations to the entire team. Thanks for the extra pressure (sic).”

Shahid Kapoor announced earlier this year that his film Jersey will release on November 5, 2021. Shahid will be playing the role of a cricketer in Jersey and he had to undergo rigorous training for his role in the film. The actor often shared pictures and videos from his training sessions on Instagram.

Take a look at some of the posts here:

Shahid Kapoor announced the release date of Jersey with this post:

ON THE WORK FRONT

Shahid Kapoor was last seen in Kabir Singh (2019), which was a massive hit at the box office. Kabir Singh was the Hindi remake of Vijay Deverakonda’s film Arjun Reddy. Shahid will also make his debut on the OTT platform soon. The actor has collaborated with Raj & DK for his digital debut.

ALSO READ| Shahid Kapoor wraps up Jersey, says shooting during Covid is nothing short of a miracle

What went right this week: the power of the grassroots, rare toads and more positive news – Positive News

Bitcoin Outlook Clouded by ‘Death Cross’ Chart Formation: All You Need to Know