Krunal Pandya, who smashed 58 not out off 31 balls on ODI debut, dedicated his record-breaking innings to his father, who died due to cardiac arrest in January 2021. 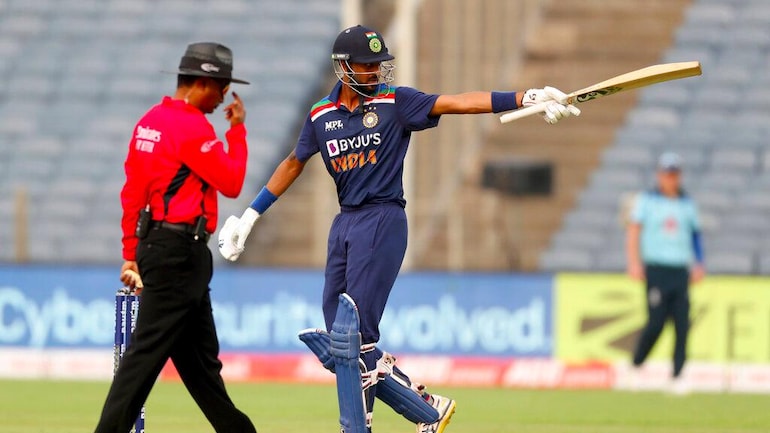 Former India cricketers Sunil Gavaskar and VVS Laxman heaped praise on all-rounder Krunal Pandya who set a new record on ODI debut in the ongoing match against England in Pune on Tuesday.

Krunal, who was handed his debut ODI cap by younger brother Hardik before the match, smashed 58 not out off 31 balls in his maiden innings to help India post 317 for 5 in 50 overs in the 1st ODI.

Krunal brought up his half-century off 26 balls which is the fastest-ever by a debutant in ODI cricket. His knock is also the 11th highest by an Indian on debut.

Krunal, who became very emotional when he got the cap, broke down in tears again during an interview after his knock as he remembered his late father. He even dedicated his record-breaking innings to his father, who died due to cardiac arrest in January 2021.

This is all heart

“His father would be super proud of his achievement. Krunal was very emotional when he was getting the cap. Hardik presented the cap to Krunal. That was an excellent gesture from Virat Kohli and Ravi Shastri to allow Krunal’s brother to give him that cap,” VVS Laxman said on Star Sports at the mid-innings break.

Krunal added 112 off 57 balls for the sixth wicket with KL Rahul, who remained not out on 62. The two players had come to the crease before India suffered a mini-collapse, losing 4 wickets for just 36 runs thanks to Mark Wood and Ben Stokes’s spells.

But they helped the team recover beautifully and post a challenging score on a good batting wicket at the Maharashtra Cricket Association Stadium. Krunal his 7 fours and 2 sixes while Rahul’s knock was laced with 4 boundaries and as many maximums.

“At one stage, it looked like England would restrict India to 280 but the unbeaten partnership allowed India to get those extra runs. Krunal just eased it for KL Rahul,” Sunil Gavaskar said on Star Sports.

India opener Shikhar Dhawan was the team’s top-scorer with 98 runs while captain Virat Kohli also made a useful contribution, scoring 58. Stokes grabbed 3 for 34 while Wood finished with 2 for 75.

PHOTOS: Deepika Padukone makes heads turn in an all black outfit as she is spotted post a shoot in the city