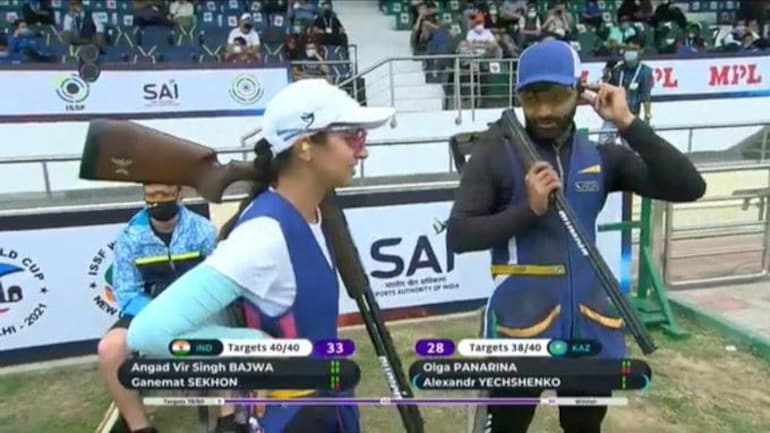 India bagged another gold medal in the Skeet Mixed Team event with Angad Vir Singh Bajwa and Ganemat Sekhon producing a top performance against Kazakhstan in the final on Tuesday.

Ganemat and Angad, who had topped the qualification with a score of 141, produced another good show beating the Kazakh pair of Olga Panarina and Alexandr Yechshenko 33-29 in the gold medal showdown.

With this, table-topper India’s gold medal haul at the ongoing event went up to seven. Another Indian pair of Parinaaz Dhaliwal and Mairaj Ahmad Khan, however, missed the bronze medal by a whisker at the Dr. Karni Singh Shooting Range.

Qatar’s Reem A Sharshani and Rashid Hamad claimed the bronze medal with a score of 32 against the Indian team’s 31.

The duo had produced a perfect score in the final four shots even as 19-year-old Dhaliwal crumbled under pressure and missed a shot to miss out on the medal.

Ganemat, 20, had won the country’s first-ever ISSF World Cup medal in the women’s skeet event when she bagged a bronze on the third competition day.