A man charged with beating to death a New Jersey resident he says sexually abused him as a child now claims he has killed a total of 16 people, including his ex-wife and three others found dead near a New Mexico airport, officials said. Authorities have not corroborated his claim.

Sean Lannon, 47, said he killed the four whose remains were found in a vehicle and “11 other individuals” in New Mexico, Alec Gutierrez, an assistant prosecutor in Gloucester County, New Jersey, said at a detention hearing Friday, NJ.com reported.

Gutierrez said Lannon had confessed to luring several victims to a home in New Mexico and dismembering some of them. Police investigate a pickup truck where four bodies were found last Friday, March 5, on the upper level of the parking garage at the Albuquerque International Sunport, Wednesday, March 10, 2021, in Albuquerque, N.M. (via AP)

Authorities said in court documents that Lannon made the admission in a phone call to a relative, who told investigators he expressed remorse. Lannon has been charged only with the death in New Jersey, and his lawyer says his client was provoked. He has been named a person of interest in the four New Mexico slayings.

Police Lt. David Chavez in Lannon’s hometown of Grants, New Mexico, said authorities have no indication that his claims about 11 other killings are true and that they aren’t aware of any missing-person or homicide reports that would fit his narrative.

“Is it possible? Sure, anything’s possible. Is it plausible?” Chavez said. “Unfortunately we are still investigating that and conducting search warrants for evidentiary value.”

It was a twist in a case that spans the country but has many unanswered questions, including how Lannon was connected to the New Mexico slayings. Officials from the FBI, US Marshals Service, several police agencies in New Mexico, and police and prosecutors in New Jersey either didn’t respond to requests for comment Saturday or didn’t immediately have more information.

The case began on March 5, when the bodies of Lannon’s ex-wife and three other people were found in a vehicle in a parking garage at Albuquerque International Sunport, New Mexico’s largest airport. It’s not clear how they were killed.

Police say three of them were reported missing in January from Grants, about 80 miles (130 kilometers) west of Albuquerque. The victims were identified as Jennifer Lannon, 39; Matthew Miller, 21; Jesten Mata, 40; and Randal Apostalon, 60. 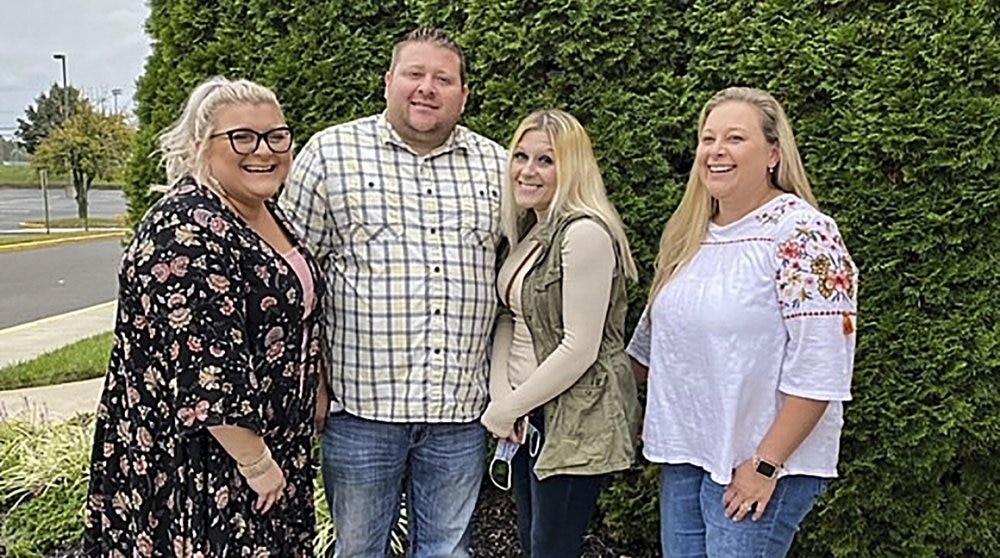 In this photo taken in October 2020, Jennifer Lannon, second from right, poses for a photo with her brother Chris Whitman, second from left, and sisters, Sarah Whitman, far left, and Kim Bermudez in Blackwood, N.J. Lannon’s body and three other people were found in a vehicle in a parking garage at Albuquerque International Sunport, New Mexico’s largest airport, on March 5.

Chris Whitman, Jennifer Lannon’s brother, said that Sean Lannon told the family in January that Jennifer had “run off” with some friends, possibly to Arizona. Whitman said that didn’t sound right.

“She was a great mom and, just, it would be uncharacteristic of her to not be with her children,” Whitman told The Associated Press Saturday in a telephone interview from his home in Washington Township, New Jersey. When the family were unable to reach her, he said they filed a missing person’s report.

Jennifer Lannon, Miller and Mata were friends, and Apostalon lived out of his car and was known to give rides for money, Grants police said. The bodies were found in Apostalon’s car.

“I can understand he (Sean Lannon) stated that, you know, he shot his wife and her boyfriend,” Chavez said. “But Matthew was not her boyfriend, so I don’t know how he became involved.”

Whitman told the AP that Sean Lannon had flown to New Jersey March 4 with the couple’s three young children – girls 6 and 7, and a boy aged 4. Lannon took them to his parents’ house and said he was going back to New Mexico to continue looking for Jennifer.

Whitman told the AP that although the couple had divorced after nearly a decade of marriage, they were still living together. They were even talking of moving the family back to the East Coast, he said.

“They were still parenting together, and there was no indication that there was trouble -at all,” said Whitman. “From my knowledge and our family’s knowledge, they were working on their relationship and heading in the right direction.”

On March 8, three days after the remains were found in New Mexico, the body of Michael Dabkowski was discovered in his New Jersey home, just south of Philadelphia, after a welfare check. Sean Lannon is accused of breaking in and beating the 66-year-old to death with a hammer, according to an affidavit.

Lannon told investigators that Dabkowski had sexually abused him as a child and that he had gone to the home to retrieve sexually explicit photos. Dabkowski mentored Lannon and his twin brother through a Big Brothers program in the 1980s, NJ.com reported.

Whitman said the family did not know of the alleged abuse. In fact, he said he met Dabkowski at the birthday part of one of the Lannon children a couple of years ago, and all seemed fine.

“I knew he was a close, just a close friend to Sean, and that he was a father figure,” Whitman said. “But outside of that, we knew nothing else.”

A search for Lannon ended with his arrest in St. Louis on March 10. He was driving a car stolen from Dabkowski.

In court in New Jersey on Friday, public defender Frank Unger challenged probable cause for the murder charge, arguing that Dabkowski had allowed Lannon into his home and that what followed amounted, at worst, to manslaughter provoked by passion, NJ.com reported.

He said Lannon didn’t want anyone “to have control over me any longer” in trying to take back the photos. Dabkowski had “documented those sexual assaults, those rapes, by taking pictures of himself with Mr. Lannon in sexually compromised positions,” Unger said.

The public defender said Lannon retrieved two hammers from Dabkowski’s garage and gave them to the victim, saying, “You’re going to need these. I don’t want to hurt you.”

“I would suggest that this fact alone illustrates this was not purposeful murder. He did not even bring a weapon to the home,” Unger said, arguing that Dabkowski attacked his client and then was killed.

Unger wanted the judge to release Lannon before trial, saying he had no prior convictions and is an Army veteran with an honorable discharge.

Lannon was born in Massachusetts and spent most of his early years in suburban Philadelphia’s Gloucester County before he was deployed to Germany, Unger said. He has family in southern New Jersey, including his mother and sister.

But Gutierrez said Lannon “admitted his efforts to conceal evidence” in killings in New Mexico.

The prosecutor added that Lannon had previously spent a week in jail in New Mexico for failing to appear in court. It wasn’t clear what he had been cited with.

The judge ordered that Lannon remain behind bars.

Whitman said Lannon’s story of abuse was “heartbreaking.” And while his family is angry and hurt, there is a part of him that feels sorry for his former brother-in-law.

“We still want justice,” Whitman said. “We’re clinging to our faith right now in the Lord. And, you know, one day – it might not be any time soon – we want to get to a place of forgiveness for him.”

India vs England: Rohit Sharma and Shikhar Dhawan have done well for us and will open in ODI series- Virat Kohli