England’s limited-overs captain Eoin Morgan, on Monday, has provided an update on Jofra Archer’s elbow injury that ruled him out of the upcoming ODI series in India. 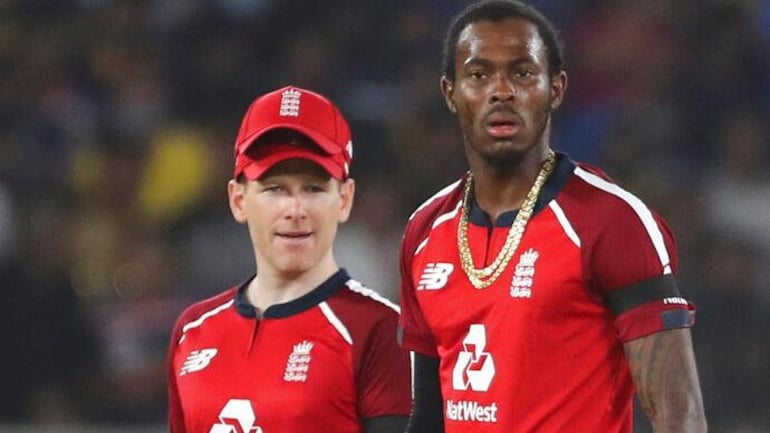 Eoin Morgan has provided an update on Jofra Archer’s elbow injury. The England limited-overs captain has said that the elbow injury, that ruled Archer out of the ODI series against India, worsened progressively and needs full attention.

Morgan, addressing the media on Monday (March 22), said that the team and the management has entrusted the medical team to choose the best possible rehabilitation programme for the pace spearhead.

“To be honest, I cannot give a medical opinion. We know the situation with his elbow, it has progressively gotten worse. We know that it needs investigation, only time will tell. He has given his heart and soul to us since he has been involved so we will give him full attention in order to try and bring the best result possible,” said Morgan.

The ECB, on Sunday, announced the full squad for the 3-match ODI series against India. Archer missing out raised a lot of questions regarding his availability in the Rajasthan Royals squad next month as the IPL starts on April 9.

“It all depends on the outcome of the investigation that the medical team will do [Archer’s return to India for IPL 14]. They will determine the best rehabilitation programme coming back and we will go from there. We fully trust our medical team; they have outstanding regarding player welfare and player rehabilitation. The trust is always there,” he added.

England head coach Chris Silverwood said that it was a ‘joint decision’ made by both parties and talked about the importance of getting to the bottom of Archer’s injury and get him fit and fine as soon as possible.

“Jofra Archer is returning to the UK for further management and investigation of his right elbow injury. It was a joint decision. Both parties have put England first, basically. He needs to get this right. He needs some time to do that so we’ve made space to make sure that we gave him the best chance of being successful for England,” Silverwood was quoted as saying by ESPNCricinfo.

“All parties agreed on that, and obviously Jofra was very keen on that as well. He wants to be at the World Cup and he wants to be at the Ashes. It wasn’t a difficult decision by either side to be honest – I think it was a sensible decision,” he added.

The Gujarat Model: How the state ramped up water conservation efforts – Nation News